Cool Camaro resto-mods, done properly, remain some of the hottest collector cars on the market

We’ve discovered this very nicely done ’68 Camaro convertible with awesome paint, a great-running small block with overdrive transmission, and a beautifully finished interior, making it the car you’d build for yourself.

Finished in brilliant code R Matador Red with black SS nose stripe, there’s no mistaking this car for anything but a Camaro. The two-stage urethane finish gives it a depth that enhances the Camaro’s shape. It retains its original hood, complete with velocity stack inserts and it’s the right compliment to the ducktail spoiler out back, making this one of the sportiest cars of the decade. There’s deep chrome on the bumpers, the bright wheel well trim has been polished to a high shine, and SS badges have been installed in all the proper places, including the fuel filler cap. It also has LED taillights and RS headlights hidden behind electric doors, and while there’s no way to know if it’s a real RS/SS, it sure looks the part!

The black and white houndstooth interior is timeless and in this car, everything has been restored. The low back buckets have fresh covers, and the carpets look just as fresh while the door panels are reproductions that offer crisp detailing. The gauges, which include a tick-tock-tach nestled into the original pod, are fully operational, and a quartet of modern gauges are down low in the console much like the factory setup. A recent Retro AM/FM stereo has been retrofitted in the stock location and this is a factory air-conditioned car that now uses reliable modern hardware to make the chill. The world’s coolest automatic shifter sits in the console, and you’ll note that there are now detents for four forward gears, complements of the 700R4 4-speed automatic transmission. The trunk features a new mat and full-sized spare and the black power convertible top fits as well as any we’ve seen.

Under the hood you’ll find a warmed-over 350 with plenty of chrome and other dress-up parts. The block wears Chevy Orange paint, but nobody’s going to mistake this engine bay for original. Up top there’s a 4-barrel carburetor atop a polished aluminum intake, topped by a finned air cleaner and matching valve covers. Long tube headers bolster the torque curve in a big way, and you’ll be pleasantly surprised by the bark of the engine when you dip into its considerable reserves of power and the transmission kicks down. And speaking of transmissions, this one is a 700R4 4-speed automatic driving a 12-bolt rear with 3.55 gears inside, so it’s a fantastic highway car and punchy around town. Suspension upgrades include subframe connectors, slotted brake rotors, urethane bushings, Monroe shocks, and big sway bars fore and aft. Gorgeous 15-inch Torque Thrust D wheels look made for the early Camaro body, and wear 215/65/15 front and 235/60/15 rear BFG performance radials. 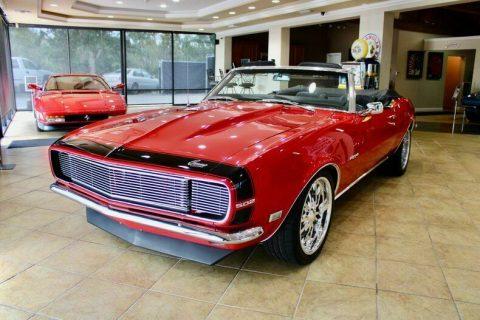 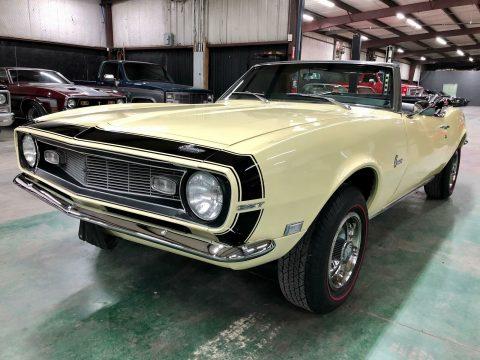 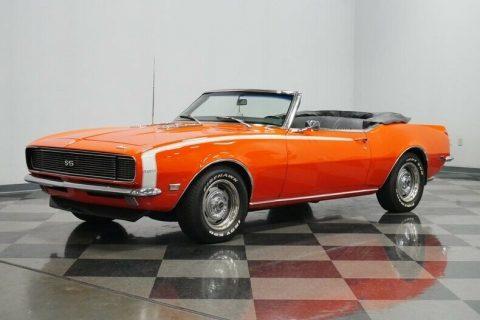 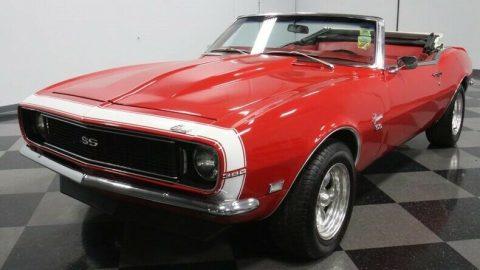 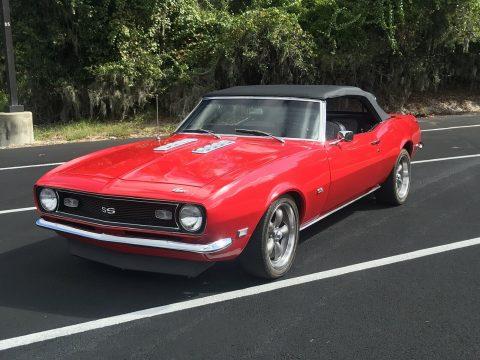